WASHINGTON, DC (Feb. 14, 2017) – Outmanned and outgunned against the greatest Navy in the world, the Americans fighting for independence had one ace up their sleeve: a secret spy network. In time for President’s Day weekend, the International Spy Museum is putting on display the original 240-year-old handwritten letter penned by the first president of the United States of America, then-General George Washington, that launched an innovative network that helped the Americans win the Revolutionary War.

Washington drafted the letter on February 4, 1777, enlisting his trusted confidant Nathaniel Sackett, a New Yorker who had proven himself a valuable spy catcher, as his spymaster. In his note, Washington offered to pay Sackett $50 per month plus $500 to set up the network which evolved into the Culper Spy Ring, a predecessor to the Central Intelligence Agency (CIA).

“Without strong intelligence, there is a high likelihood that the United States would have lost the war,” notes Dr. Vince Houghton, curator and historian at the International Spy Museum. “Without this letter, American Intelligence today doesn’t exist…and neither would the United States.” 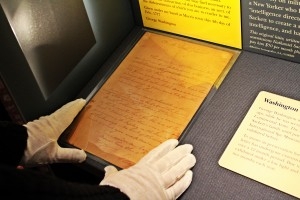 Between February 14 and mid-April, guests will have the opportunity to come face to face with the founding document of American Intelligence. Due to age and fragility, the letter can only be displayed for two months of the year. It spends the rest of the year off-site for preservation while an exact replica sits in its place at the Museum.

For media interested in interviews, photos, or more information about the Trojan Horse project, please contact Aliza Bran at (202) 654-0946 or abran@spymuseum.org.

About the International Spy Museum

The International Spy Museum, a 501(c)(3) nonprofit entity, is the only public museum in the United States solely dedicated to the tradecraft, history, and contemporary role of espionage and intelligence. Open since July 2002, the Museum features the largest collection of international espionage artifacts ever placed on public display. The mission of the International Spy Museum is to educate the public about espionage and intelligence in an engaging way and to provide a context that fosters understanding of their important role and impact on current and historic events. The Museum's collection chronicles the history of espionage, from its inception, to the modern day challenges facing intelligence professionals worldwide in the 21st Century.