What was it like to go undercover and spy on the British during the American Revolution? James Lafayette did it against all odds. An enslaved African American in New Kent County when the British invaded Virginia in 1781, James soon found himself working for the Continental Army under the Marquis de Lafayette, and his exploits would influence the outcome of the American Revolution.

In this original one-act play, combining live performance with film, Jamar Jones portrays the brave man who passed as a runaway slave to gather information in the British camps and pass along misinformation to fool General Cornwallis. Slave Spy was written by Abigail Schumann and produced by the American Revolution Museum at Yorktown. 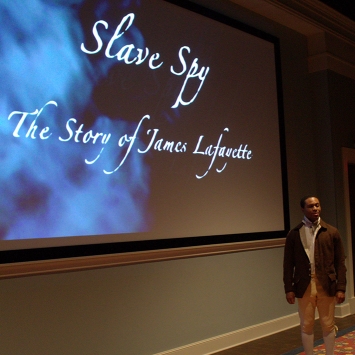